Check out The Legend of the Legendary Heroes

The Legend of the Legendary Heroes 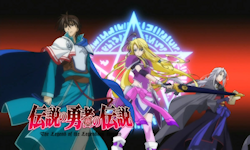 This is a world in which many legends have been left.

In the southern parts of the continent is the Roland Empire. A country in which its people are oppressed by the decadent nobility. By command of King Sion, Ryner and Ferris are sent on a journey.

Ryner is an extremely lethargic person. All he desires is a life of peaceful indolence. However, destiny has other plans and they are soon caught up in a war. What is the future that lies before the light shining from Ryner's "eyes"?

Check out The World God Only Knows

The World God Only Knows 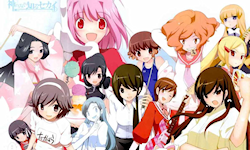 Katsuragi Keima, a second-year high school student, is an avid dating sim gamer. He is known on the Internet as The Capturing God for his legendary skills to be able to capture any 2D girl in games. However, in his actual school life, Keima is known as otamegane (ã‚ªã‚¿ãƒ¡ã‚¬ãƒ), a derogatory portmanteau of the two words otaku (ã‚ªã‚¿ã‚¯) and megane (ãƒ¡ã‚¬ãƒ - glasses).

At the start of the series, Keima receives an e-mail offering him a contract to capture girls. He accepts what is thought to be a challenge, and a demon from Hell nicknamed Elsee appears. She asks for his cooperation to help her in catching the runaway spirits. These spirits hide themselves inside the girls' heart, and Elsee suggests that the only method to force the spirits out is by capturing their hearts — making them fall in love. Appalled by the idea, Keima refuses after clarifying to Elsee that he is only interested in capturing 2D girls and that he detests reality. Nevertheless, with the contract already accepted, Keima would have to help Elsee no matter what; if they fail, both Elsee and Keima would lose their heads.

More than 160 years has passed since the orbital station (Skyport) fell on earth and wiped out all of humanity. The moon colony, Eden, has survived and expanded. In the year 2267, at the age of fifteen, Takeru is taking full advantage of Freedom - the short interlude between the end of compulsory education and the rite of becoming a full citizen. He has taken to hanging out with his friends and running his custom built vehicle in the local races. Angry at a racing loss, he goes for walk outside of the dome and stumbles across some strange items and pictures scattered about in a crater on the surface of the moon. Entranced by a picture of a girl standing under a blue sky, Takeru begins to ask questions that the Eden's ruling Foundation does not want answered.

For unknown reasons, The Foundation has perpetuated the myth that all life on earth has been wiped out and is willing to take extraordinary steps to keep the secret secure.

Well it looks like it's about time to open up the season for encoders. We have a second past encoder dusting off their encoding gear. Kij0 is getting back in the game so you can expect some more delicous encodes coming your way in the future.